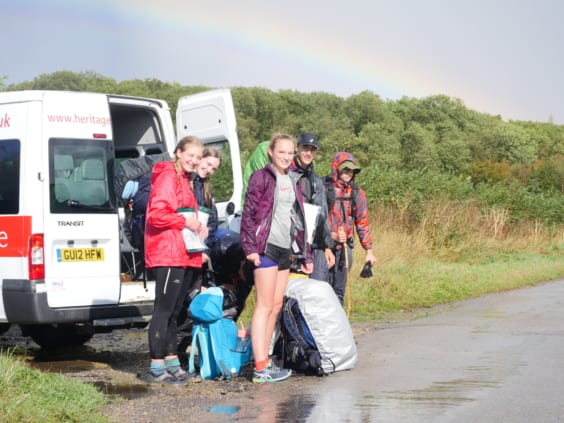 Over a blustery, showery, sunny two days 18 Year 10 pupils undertook their bronze Duke of Edinburgh assessed expedition. The pupils walked in the rolling, mostly arable farmland of the Northamptonshire/ Cambridgeshire countryside, with their routes incorporating several beautiful, sandstone built Northamptonshire villages. There were three groups of six and each group started from a different point, being either Ellington, Grafham or Islip. All three groups were then to converge approximately 13km later at Little Gidding, for their night’s camping. Every single one of those who took part walked with an incredibly good pace and in good spirits, despite experiencing hailstones in their faces at some points! All arrived in good time to enjoy a hot meal cooked by themselves and then a warming campfire, before collapsing into their sleeping bags for varying degrees of sleep, depending on how cold they were!
The next day the groups set off in early morning sunshine and completed a further approximately 11km, still carrying their heavy backpacks, to arrive at their destinations of either Ashton, Barnwell or Warmington. Mr and Mrs Symons, who assessed the expedition, thought that these were some of the fastest groups they have ever seen! Well done to Year 10.