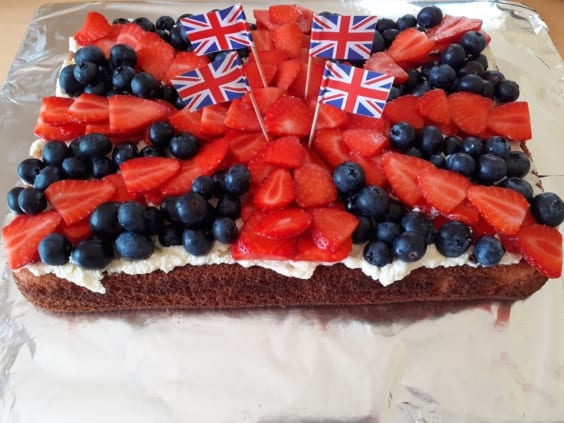 As we commemorate VE Day today, the children at school have been busy making bunting. Many at home have done the same thing and we have received lots of pictures of celebratory family lunches and beautifully decorated cakes. Year 8 were asked to continue their Scavenger Hunt Tray Challenge by making a VE Day tray today. Others cooked up Churchill’s favourite fruit cake following Mrs Landemare’s receipe – Churchill’s long-standing cook both at Downing Street during the war and then at his family home, Chartwell in Kent.

At this time of reflection, as many have listened to Churchill’s speeches and watched the Red Arrows flyby, we asked Hope’s Grandmother, (known to many as Granby), for her memories of VE Day. Hilda Stoneley was 18 years old on VE day and this is what she said:

‘Around midday, the air raid ‘all clear’ siren sounded. We wondered what it was all about. My parents heard the news on the radio. My father suggested, in the early evening, that we went to Hampstead Heath, high up to see if all the house lights were on. (During the war everything was blacked out and you were fined if you showed a light.) I was wearing my school uniform.’

‘We went to the tube station at Brent and got a tube to Hampstead, where we saw people sleeping on the platform as their houses had been bombed (or they were scared they might have been bombed.) We walked up the steep hill to the round pond, and here we found a large bonfire had been lit. We all held hands and danced around the bonfire and then the pond, and people jumped in the pond and celebrated! It was very exciting to look over London and see all the houses with their lights on and the curtains open and not blacked out.’

‘After this we walked all the way home, down the hill into Hampstead garden suburb, along past the tube station and the bus depot and along the main street across the road and home. We felt very tired but excited. We had baked potatoes for supper and red jelly! We all then went to bed – for the last time -in the Morrison shelter, in the hall.’

‘The next day I went up to London by tube with my family. We saw all the people in The Mall singing and dancing and shouting in front of Buckingham Palace. Many of them had been there all night. Lots of people were waving Union Jack flags. The Evening Standard newspaper sellers were selling little flags, it was all very exciting.’ 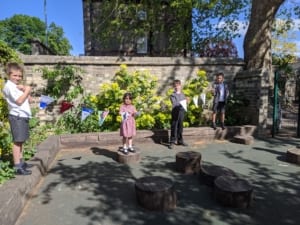 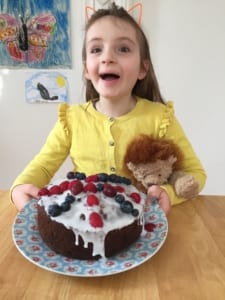 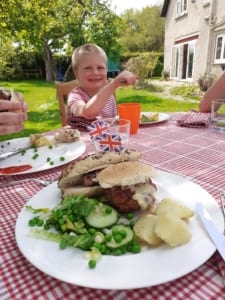