After successfully getting the minibus through the gates at Panton Hall, and then a lovely drive though some of Suffolk’s beautiful villages, we arrived at the wonderful grounds of Finborough School, ready for the regional round of the ISA cross country. Mr Buchanan took the Year 4’s for their warm up, while the older pupils walked the course and soon it was time for the races to begin.

Year 4 girls were first up with Izabella, Anna and Hannah representing Heritage. Nervously trying to keep their heart rates up, the girls waited for the start. And they’re off! 1800m later and flying into the final furlong comes a white shirt of Heritage. Hannah was well ahead of the rest of the field and claimed the gold medal as well as selection to represent the East Region at the ISA nationals in March. Then shortly afterwards, Anna had a strong finish to come 5th—also inside the top 10, therefore booking her place at the nationals. Izabella finished a very respectable 26th out of over 50 runners. 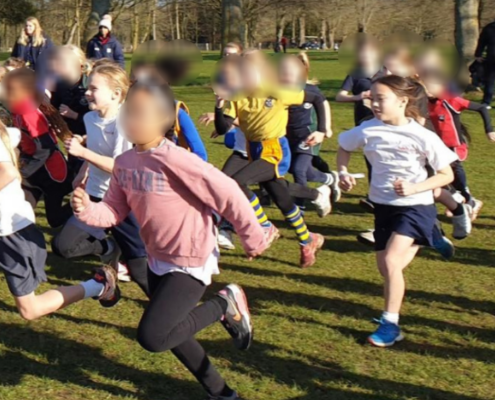 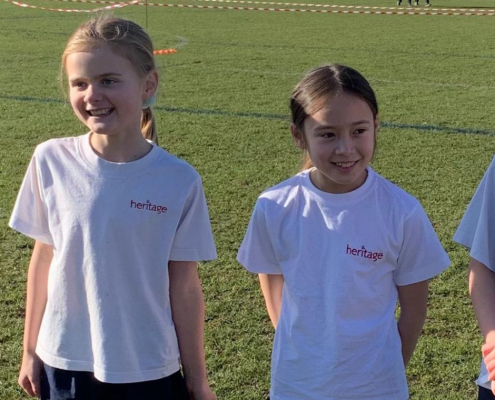 Then it was time for the Year 4 boys. Sam and Wilfrid were running the 1800m course too. There were nearly 80 competitors in this race and the boys did brilliantly. Wilfrid finished 11th so stands in the first reserve slot for the nationals. Sam came in 21st, showing great determination in the final 100m.

Year 5 and 6 girls next, a 2.1Km race where Heritage was represented by Kitty (Y6). Before the race, Kitty had told me that she was just going to go out, do her best and enjoy the experience.  Then, as the leading runners appeared into the finishing area, who do we see but Kitty—inside the top 10! Another qualifier for the nationals in 8th position. Great work and she definitely enjoyed it.

Now for the Year 5 and 6 boys and with over 100 runners over the same 2100m course, Aaron (Y6), Raphael (Y5) and Rufus (Y5) were in for a tough race. The boys had discussed tactics before the start, deciding not to panic in the initial sprint, then to work on picking off runners as the race settled. They all did admirably, with Aaron coming in 62nd, Rufus 81st and Raphael 85th.

And so it was now the Seniors’ turn, starting with Megan, Izzy and Emily in the  Year 7 girls race. Again, tactics were discussed with the prediction that most runners would sprint straight from the start. The girls agreed that this wasn’t  a strength for any of the three and so they would all rather set off at a comfortable pace,  then gradually make their moves over the next 2700m. How proud were all the Heritage team when the girls emerged back into the finishing area? Emily in 6th, Izzy in 7th and Megan in 8th! What a group finish, with all three qualifying for the nationals.

Now it has to be mentioned, that once the runners had finished their race, there was a BBQ available, serving hot dogs and burgers. I am not sure who won this part of the day (everyone was warned that Mrs Eastwood would not be pleased if she had to stop the bus on the way home), but the Year 4 and 5s certainly made the most of this opportunity. 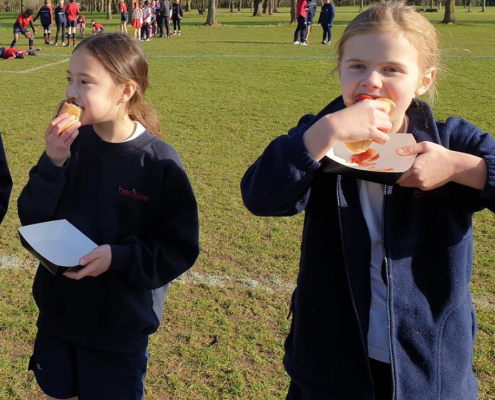 Josh was our sole representative in the Year 7 boys race, which turned out to be very competitive. Josh finished a creditable 20th over the 2.7 km distance.

In the  Year 8 and 9 girls race, Emilie (Y9) ran an excellent race over 3000 m. She used the most of her football fitness, keeping a steady pace and gradually making her way past the majority of the field to finish 9th! Another qualifier for Heritage.

Next up was the Year 8 and 9 boys race, with Silas (Y9) and Sandy (Y8) wearing the white and red of Heritage. Silas has had an excellent season so far, already winning the Cambridge District Championships followed by a silver medal at the Cambridgeshire schools event, and then confirming his selection to represent Cambridgeshire at the prestigious English Schools competition after a good finish in the Anglian schools event. The race got underway, with the predictable jostling for position. (Afterwards, we discussed why distance runners need elbows.) 3 km later, and Silas finished strongly in 2nd position. Sandy had said, much like his sister, that he was going to run a steady race, see how things went and to enjoy the experience, but once again the Heritage team were jumping up and down when we saw him come into the finishing area in 4th. An amazing run from both boys, both qualifying for the national finals. (You can see the awesome support from the rest of the team in the last photo below!)

The last race of the day saw our final two representatives, both from Year 11—Louis and Kit. There was controversy out on the course as Louis, who was at the front, and another runner briefly went the wrong way, putting them about 400m behind the leaders. However, resilience and determination were in good supply as Louis fought his way back to finish 5th. His challenge is to now outdo his older sister Leah, who came 3rd at the nationals three years ago! Kit also had an excellent race, cheered on by  his younger teammates as they saw him coming into the finishing area to claim the gold medal in 1st place.  So both Year 11s will go through to the ISA finals in March. What a successful day for Heritage!