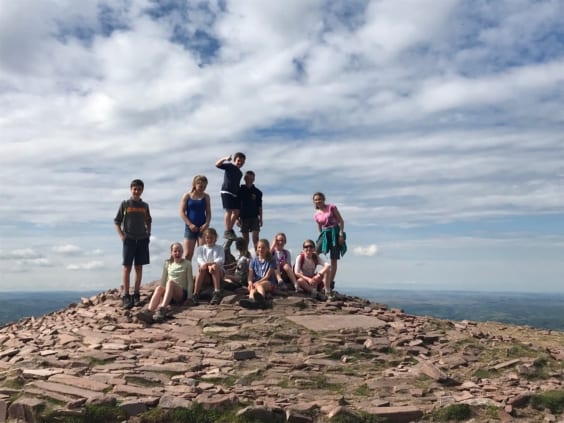 The Gower Peninsular is an Area of Outstanding Natural Beauty, where for 51 weeks of the year, wildlife and locals can enjoy a peaceful existence. Then every so often we hold the Heritage Senior Camp there and this sleepy corner of South Wales becomes much noisier as the children invade and explore it from all angles.

This year the four DofE practice expeditions (2 Bronze, 2 Silver) did themselves proud with excellent navigation and relatively high speed walking, completing their walks in good time. The Year 9 boys went looking for somewhere called “Eee-Bombay” (best ask them what this means) – not sure that they ever found it, but the search appeared to keep their morale high. Mrs Cubitt, Mrs Illman and Mrs Strachan all walked their socks off, providing both direct and remote supervision of some of the groups. The Year 7 and 8’s managed to surround their teachers and shoot them up at the Laser Combat zone and then either cooked a cake in a cardboard box over a fire (yes, really) or make a boomerang. They also had the chance to sea kayak from the beautiful beach at Oxwich bay. Year 9 and 10 recuperated from their expedition by spending a day canyoning in the Brecon Beacons, whilst the Year 7 and 8 climbed some mountains, enjoying a lunch break on Fan-y-Big before scaling Cribyn and Pen-y-Fan. Evenings on camp were spent playing games supervised by Mr Appleyard and helpers, to whom huge kudos goes for their patience under fire from a little polystyrene torpedo thingy. The final evening was a traditional campfire, accompanied by toasted marshmallows and slightly dodgy campfire songs.

On the return journey we enjoyed a tour at The Big Pit, where we toured an old coal mine, 90 metres below ground level, guided by some ex-miners. Their depiction of life underground for children as young as 6 years of age brought home to the children how very lucky they are to live in the 21st Century in Cambridge.

The children were fuelled by the legendary Mr Hulett’s breakfasts accompanied by a range of contributions from other staff members – including Mr Kwan, who’s vegetarian sweet and sour and mushroom curry dishes require special mention!