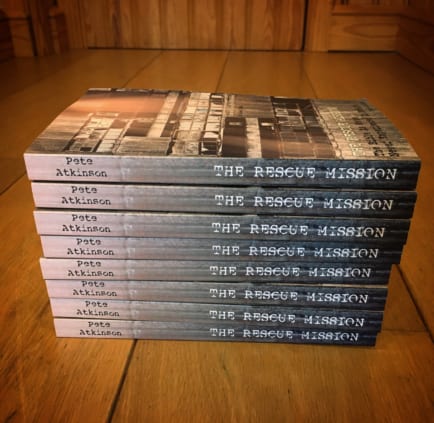 Many congratulations to Mr (Pete) Atkinson, (one of our Senior School Maths teachers) who has just published ‘The Rescue Mission,’ currently listed among Amazon’s top 10 bible commentaries.

The Rescue Mission’ is an imaginatively original and brilliantly executed piece of storytelling which presents the Bible as one continuous, page-turning narrative; it’s the Bible as we’ve never experienced it before!

“Writing ‘The Rescue Mission: The Bible As We’ve Never Experienced It Before’ has been a labour of love over 15 years. I started writing the book after learning about how the Bible could be read as one, continuous sweeping story from Genesis to Revelation; from creation to the new creation, where every tear is wiped away. I recall thinking – very naively – ‘why doesn’t someone write it like that’ and then sitting down and typing about Genesis, with absolutely no idea of the enormity of the task I was taking on!

As the project grew and grew it got under my skin until I reached the point that I couldn’t let it go. I studied piles of chunky – often dusty – Bible commentaries, making copious notes, piecing together storylines, seeking subversive twists and turns, and tracking the threads which weave from Old Testament to New. Simultaneously, I needed to hone a writing style; and the only way to do that was to practice, practice, practice. I discovered that a piece of writing is always improved by deleting; I think of it like chiselling away at a block of wood, removing words, sentences – and even whole paragraphs that took an entire day to write – until the true heart of the text is exposed.

Another significant challenge was marrying my desire for brevity and readability with doing justice to the sheer scale and detail of the Biblical story. To this end, I developed 3 narrative voices: one zooms in, seeking to elicit the thoughts and emotions of the Biblical characters; another zooms out and considers the vision and viewpoint of the Godhead, the Trinity – or to use the language in the book, ‘The Community of Elohim’. Thirdly, a mysterious character discovers the unfolding Biblical accounts in an abandoned warehouse, enabling a modern day perspective and reaction.

The Rescue Mission was first published in 2012, receiving reviews such as ‘imaginatively original’, ‘fascinating and enthralling’, ‘true masterpiece’ and ‘I couldn’t put it down’. Nevertheless, I became convinced that the book could be improved, and a heavily rewritten 2nd edition was released in April 2020. I would absolutely love for you to read it! “

The book is available at www.amazon.co.uk/dp/0244213623. You can listen to a sample chapter at https://youtu.be/oMBXiwMh2cs And find more information at www.facebook.com/rescuemissionbook

All About Butterflies!
Scroll to top