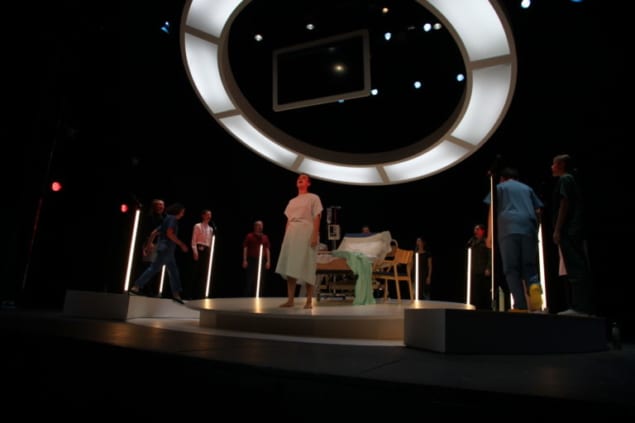 Pupils of Latin and Greek from Year 9 to Year 11 went recently to see the Cambridge Greek Play at the Arts Theatre.

Every three years since 1882, Cambridge University students, now with professional direction and staging, put on a production of a play in Ancient Greek. This year it was the tragedy Oedipus at Colonus, the story of the final moments of Oedipus’ life. Self-exiled from Thebes and self-blinded after discovering he had killed his father and married his mother, Oedipus arrives at a sacred grove near Colonus, a city not far from Athens with his daughter and guide Antigone. When Theseus, king of Athens arrives, Oedipus promises Athens great blessing if he is allowed, stay, die and be buried there.

Meanwhile Ismene, his other daughter, arrives with the news that the king of Thebes, Creon, and Eteocles, one of his sons, want Oedipus to return there so that they might secure his blessing. Creon shortly arrives, threatens war, and holds the daughters of Oedipus hostage. However Theseus, drives Creon off and rescues Antigone and Ismene. Polynices, Oedipus’ other son, arrives and asks for his father’s blessing in his war to regain the Theban throne from his brother and Creon. Instead Oedipus curses Polynices and prophesies that he and his brother Polynices will die at one another’s hand.

Suddenly Oedipus hears thunder and declares that his death is at hand. This was signalled in this production by the increasing flashing of the oversize operating lamp that hung above the stage and a massive increase in sound effect volume. Oedipus withdraws and only Theseus witnesses his death and miraculous translation. Antigone and Ismene return to Thebes hoping to avert war and civil strife.

This production married authentic pronunciation of the ancient Greek text with a modern, even futuristic set design which set the play in a hospital with Oedipus based in or around the hospital bed for the entire play. The chorus were situated all around the bed at microphones and sang the ancient poetry to powerful modern music as well as beat-boxing many of the sound effects.

We were also  fortunate to attend the pre-show lecture by Professor Simon Goldhill which usefully set the play in its context  and explored fascinating ideas such as the hero as outsider which both unlocked key texts in the play but made links to its political impact then (for Greek tragedy emerged alongside Greek democracy) and had resonances with narratives to do with the outsider in modern politics!

Much Ado!
Scroll to top