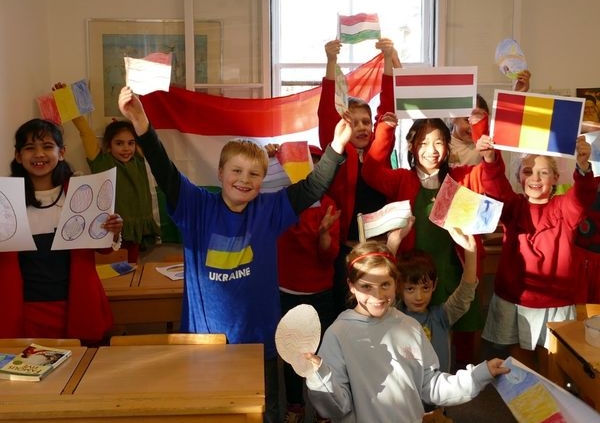 International Day, an annual celebration of cultural diversity at Heritage, was celebrated throughout the school last week. Infants and Junior turned their attention to Eastern Europe, as pupils dressed in the colours of the various countries’  flags, and special guests and activities gave classes a flavour of various countries in the region.

Lower Prep focussed on the Russian artist Kandinsky. They looked at how he made his paintings with different coloured shapes and had fun creating their own. After enjoying a Bulgarian story, ‘The Three Fruits’ at snack time, the children returned to Russia to take a look at castles before working collaboratively to build their own constructions in groups of four. The morning ended with some interpretive dancing to traditional music.

Upper Prep looked at Poland, Romania and Ukraine, with children in the class who had links to these countries sharing in presentations, explaining artefacts and donating delicious treats for everyone to enjoy. The children had a go at creating their own designs with precut birds and flowers based on the Polish papercraft, Wycinanki, and enjoyed a Polish traditional tale, ‘The Frog Prince’. They learned about the landscape and wildlife of Romania and created a fact file about Romanian brown bears. In the afternoon, they enjoyed listening to some Ukrainian music, singing and bell ringing, watched a classic Russian cartoon about a lion and turtle, before designing their own version of a Babushka Russian doll.

Year 2 had a super time learning about Poland with classmate Henry and his Mum as they explored what life was like on a Polish farm and found out about a special Christmas Eve meal. They coloured in a Polish flag and also tried their hand at Wycinanki, arranging paper flowers and leaves to create some stunning artwork. After playtime, the children focussed on Russia and the capital city of Moscow. They were amazed at the bright colours used on the exterior of St Basil’s Cathedral and had a go at designing their own.

Year 3’s exploration of Hungary began with a study of maps to find  information about Hungary, the nations around it, its capital city Budapest, and some of the rivers that run through it. Next, it was story time; Miss Moorhouse first shared the story of how her grandfather came from Hungary to England in 1946, having lived through the Nazi and Soviet occupations during the Second World War. Then, the pupils heard the Hungarian folk story of ‘The Prince Who Would Seek Immortality’. The children chose their favourite story of the two, and recreated it in the form of a comic strip.

Year 4  had a very artistic International Day experience, starting with some Polish papercraft of their own. The pupils also made a flag of the country in whose colours they were dressed. In the afternoon, each of the children made a Bulgarian Martenitsa, a woven craft made with red and white string related to the welcoming of Spring.

In Year 5, Sasha’s mum visited the class to tell them about life in her home country of Russia, including the very charming Russian version of Winnie the Pooh. (Look it up if you’re not familiar!) Classmate Rafael also talked  about about his mother’s home country of Latvia and provided some Baltic gemstones for the pupils to take home. Mark’s  father visited the class to talk about Orthodox Christian religious icons that are prevalent in many Eastern European countries, and helped the class make some of their own.

Year 6 focused on Russia and Latvia, beginning the day by doing the  register in Russian. They then listened to the story of Baba Yaga—a Russian folk tale —and wrote ‘Airbnb’ descriptions for Baba Yaga’s house. Pupil Markus gave a fascinating talk about his mother’s country, Latvia, and the flautists in the class gave a mini concert of Russian folk music. Finally, the class baked little Russian jam biscuits, and enjoyed eating them afterward.

In the Senior School, pupils celebrated International Day with a Senior Council-sponsored  non-uniform day, raising just shy of £200 for Link House, a Christian organisation helping international students with accommodation, support and friendship as they settle into life in Cambridge. Seniors also had an opportunity to present about a chosen country during their Thursday Assembly.  Each of the following pupils did an outstanding job. Luke and Sandy (Y8) gave a talk about Kazakhstan, starting with an overview of its geography, economy, size, and history and then including some additional notable facts; for example, the variation in highest to lowest temperature throughout the year can be as significant as 80 degrees Celsius!

Livia and Millie (Y10) presented a comparison of India and Germany, delving into each country’s  history, food, clothing and sport. Each of the pupils also shared their personal connection to each of the countries, with Millie talking about her family’s origins in the Punjab state of India and Livia describing her love of German composers, Christmas markets and the mountains of Germany.

Ben and Timothy (Y11) gave a presentation on China, explaining what they admire about the country and giving an overview of the language, the celebration of Chinese New Year, and some interesting information about zodiac signs. (For example, Mr Burden has the zodiac of a snake, so according to legend he is calm and talented, but sceptical.)

A big thank you to all of the teachers, parents, and pupils who made this year’s International Day a huge success!

Netball Triangular vs The Leys
Scroll to top