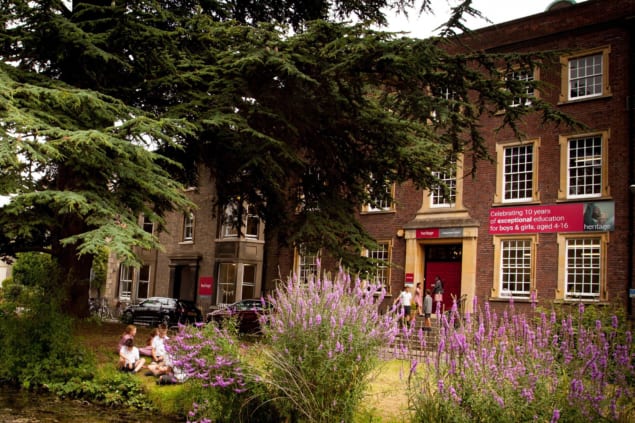 A letter from the Headmaster, Jason Fletcher

It is my pleasure to inform you that today, Child Light Limited, the charitable company which operates Heritage School, became the owner of 17-19 Brookside.

With the purchase of 17-19 Brookside today, we can say that the work of Heritage School has been firmly established where it was planted. We pray that this work will be able to serve Cambridge families for decades to come.

On a Saturday evening in January 2019 (it was the 12th) I received a phone call from one of our landlords. They had decided, he told me, to sell 17-19 Brookside and we had until mid-April to put forward our best offer in the region of £5,000,000 to £6,000,000. Otherwise, the property would be put on the open market. About two weeks later, I received a letter informing us that the landlords were serving notice of their right to break (i.e. cut short) the lease, so a new owner would have vacant possession at the earliest opportunity. We had 18 months left, until the summer of 2020.

On Sunday the 13th I met with two Trustees to begin thinking through our response. Immediately, we started the process of talking to banks as well as to friendly investors, potential donors and charitable trusts to see what might be possible. We appointed Bidwells to act for us and commissioned a valuation. A small group of us gathered weekly to pray.

Meanwhile, we began negotiating with the landlords to sign a new lease that would undo the break they had served and give us more time, even if the building were sold to new owners. We became acutely aware that having only one more year on site would have a severe impact upon pupil numbers in 2019-20 and the viability of the business. By the time we wrote to the parent community on the 13th of March 2019, the landlords had agreed a new lease with a higher rent. This guaranteed us an additional year on site until at least August 2021 – a very important step.

Initial feedback from banks underlined the scale of the challenge: we would need to raise £2,000,000 to £2,500,000 above what we might be able responsibly to borrow. With that demanding fundraising goal in mind, we were exploring the possibility of a new sympathetic landlord, and we were considering other potential sites in and around Cambridge. But we also knew that the opportunity to acquire the freehold for a site like ours in central Cambridge was rare. The long-term security and independence of ownership was, we felt, a prize worth pursuing.

Our Easter Appeal was launched on the 31st of March with accompanying videos. We had been hugely encouraged early on that purchasing the main site might just be possible by a very significant pledge of support from a friendly investor. That, together with clarification from a bank about what we could borrow, gave us confidence at the time of the appeal that we had about 80% of the necessary funds in place with, as we believed then, about four weeks left to make an offer. Thanks to the amazing generosity of so many in the parent community and beyond, our Easter Appeal raised £300,000 in donations or pledges and a further £100,000 from another friendly investor.

In response to our initial purchase offer in May of just under £5,000,000, the landlords replied in July that they would not accept anything less than £6,000,000, but that they would give us more time to improve our offer. Having taken advice from Bidwells and weighed our options — and trying to take the long view to 2030 and beyond — we signed an agreement that would give us until 29 February 2020 to meet their asking price.

At the start of January, on the advice of a parent, we opened a conversation with a different high street bank, HSBC. They have been very supportive and agreed in principle to lend us £500,000 more, covering half of the shortfall. As we approached the last week of February, we were still looking at options with new potential landlords when a friendly investor, whose support was crucial to the school starting in 2007, stepped in again and wonderfully offered to lend the remainder. On the strength of these commitments, on the 28th of February we were able formally to offer £6,000,000.

We still needed a valuation for the bank to confirm the amount they would lend. We had made reasonable assumptions for normal times, but then came the pandemic. A week into lockdown, despite the deepening uncertainty, the valuation report was issued and it was higher than we had hoped. We would be able to borrow what we needed and at a reduced cost.

Matters have progressed slowly since early April.  At last, however, the many complex pieces have come together and no insurmountable obstacles have arisen.  We have, thanks be to God, crossed the finish line – more than a year and a half since that telephone call in January 2019.

Our final position is that the cash contribution from the school, thanks to so many of you, is £500,000. Support from friendly investors totals £1,500,000, and a commercial loan from HSBC covers the rest. As I mentioned, we entered a new lease last spring. Relative to that obligation, a remarkable aspect of our final position, inconceivable even six months ago, is that the annual cost of being owners is almost identical to what we were paying as tenants.

So many of you have given so much to make this possible. We are humbled by and deeply grateful for your support – through your prayers, sacrificial giving of time and money, words of encouragement, and more – to help us achieve this extraordinary milestone. Thank you also to parents for standing with us over these many months of uncertainty. It has been an amazing collective effort.

I’ll leave you to consider these words, which were a comfort to me on the 13th of January 2019 as I pondered the road ahead: ‘Why are you so afraid, O you of little faith?’ ‘Cast your burden on the LORD, and he will sustain you.’ ‘In quietness and trust shall be your strength.’ (Daily Light for the Daily Path, 13 January, Morning)  Soli Deo gloria.

Note: Professional fees in support of this transaction have been over £150,000. We are £45,000 short of meeting all costs associated with the purchase, without any subsidy from our modest cash reserves. If you would like to make a final contribution toward the costs associated with the purchase, or pledge to contribute toward that end during 2020-21, please contact us on giving@heritageschool.org.uk.

Congratulations to our Year 11 Leavers
Scroll to top