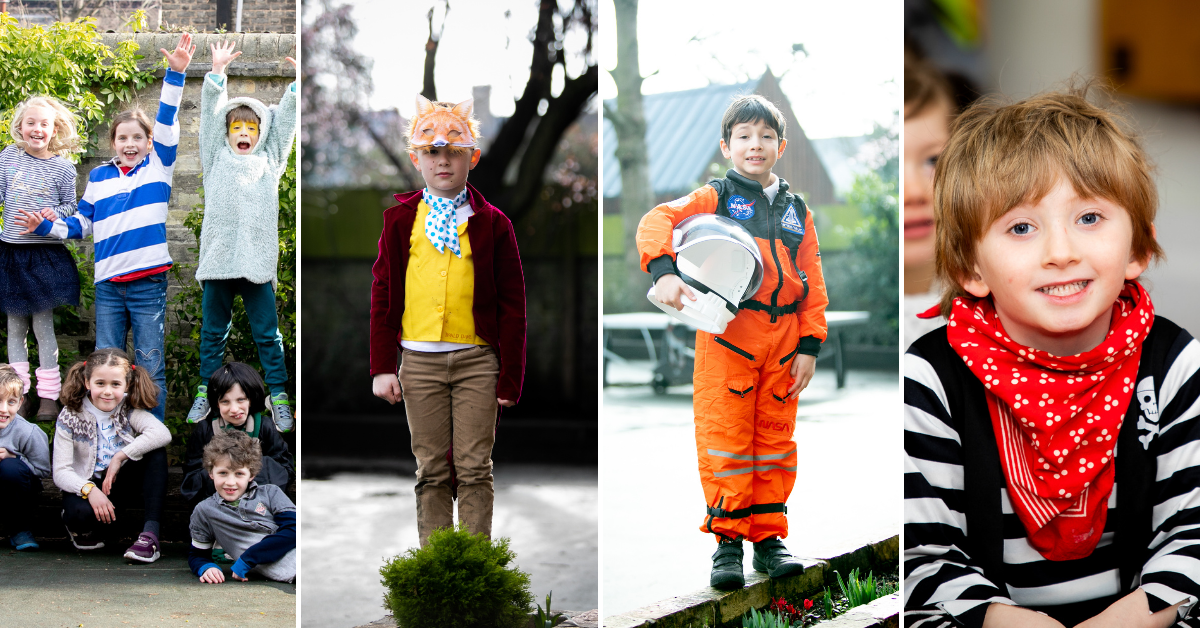 In addition to their visits from two special visitors, Infants and Juniors celebrated  by dressing up as their favourite book characters and taking part in bookish activities throughout the day.

Treasure Hunt: During the morning assembly, Mrs Watkins announced that the recent high winds had caused lots of disruption for the giant from Julia Donaldson’s book The Smartest Giant in Town, scattering his clothing all around the school. It was up to the children to search for the giant’s clothing in a treasure hunt throughout the day.

Lower Prep were excited to show their costumes to their classmates and share with them the books on which their characters were based. They also read Walking Through the Jungle by Julie Lancome, joining in with the repeated refrains of the story and trying to guess the animal on each page. Then, they practised their subtraction using the story The Shopping Basket by John Burmingham to prompt them. They also had fun making their own animal bookmarks to take home.

Upper Prep had a visit from our very own author and illustrator, Ms Emma Robertson, who read her book The Boobybirds in Lockdown to the class and told them about how she had taken inspiration from her family’s personal experiences during lockdown. The children then worked collaboratively on a sequel called The Boobybirds After Lockdown, which shows Boobybirds enjoying the lovely things that we can participate in once more, including clubs, school, water slides, trips out, going on holiday, and lots more. The finished book now takes pride of place on the UP bookshelf.

Year 2 all received invitations to join Mrs Grove on an adventure into Narnia. As they arrived, the children stepped through the wardrobe and found themselves in Mr Tumnus’ house. The class did some wonderful descriptive writing as they retold Lucy’s entrance into Narnia in their own words. They all enjoyed eating Turkish Delight with the White Witch, and then wrote a letter to persuade her to allow the Narnians to celebrate Christmas. Finally, the children made shields to take into battle against the White Witch and celebrated their win triumphantly!

Year 3 tackled some Roald Dahl-themed questions in Maths, which included calculating the length of Fantastic Mr Fox’s tail and thinking about the fraction of Matilda’s books that have already been read. They created some colourful bookmarks, played World Book Day Bingo, and wrote persuasive book reviews. They also enjoyed an engaging visit from author Alison Miles and Snippy the Crab.

Year 4 tested their book knowledge by dividing into teams and taking a book quiz. They also enjoyed designing their own bookmarks and shared some of the stories they had recently written, on the theme of Robin Hood. Alison Miles also paid the class a visit in the afternoon, telling the children all about how she illustrated her books and used rhyme to tell her stories.

In Year 5, the pupils took a World Book Day focus on their Maths lesson, completing a code breaker to find out who won the dress competition. They also made some lovely bookmarks to help them keep their place in all of the fantastic books they will be reading.

A Literary Celebration for Seniors
Scroll to top