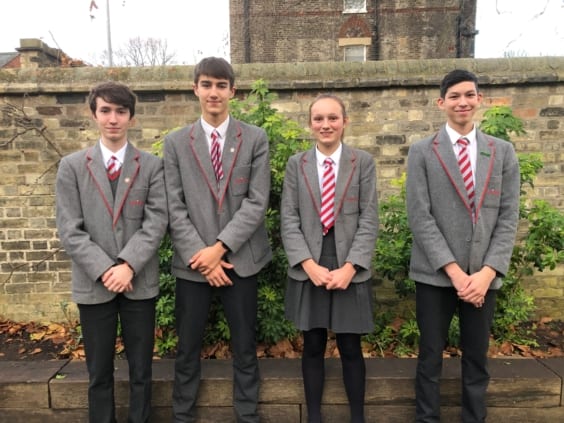 Seniors are holding a mock election today, alongside the general election. In their assembly this morning they filed past voting stations to vote and put their ballot papers in the ballot box for counting. We look forward to announcing the winner tomorrow (Friday) morning!
Our mock election started three weeks ago. Mr Burden explained the rules. All Senior were put into groups to discuss an agenda for the nation. Mr Burden then re-organised the groups so that those with similar concerns were together. Each group then had to invent their own party name and clarify their manifesto. We insisted they invent new party names to keep them focussed upon issues and not tribal family loyalties!
At our assembly two weeks ago, eight parties put forward their manifestos and we held a vote at the end of the assembly to narrow down a short-list of four parties. Pupils were not allowed to vote for their own party. Then, last week, the four party leaders put forward their manifestos in advance of today’s vote. They were asked to identify about five key policy goals. Here is the choice our pupils face…
Blue Party, led by Holly Webb, Y10: remain in the EU; refocus spending in the NHS toward prevention and mental health; free transport for young people and students; reduce university costs and aim to make them free again; eliminate single use plastics.
Green Liberal Socialists, led by Maxwell Buchanan, Y10: stop Brexit to help trade and national security; net zero emissions by 2035; increase funding for the NHS; increase tax on those earning over £150,000 per year to invest in state schools and fund environment plans.
Democratic Republicans, led by William Lauga, Y10: stop Brexit; increase funding to the NHS; more funding to various charities like Cancer Research; increase taxes on the very wealthy; make all public busses electric by 2025 and reduce fares; more bike lanes; ban single use plastics.
Bureaucratic Socialist Union, led by Peter Graham, Y11: labour front to employ those with lower skills or those becoming bankrupt; higher taxes on those earning over £60,000; poll tax of £2,000 per year; 40,000 more police officers; 20,000 more nurses and pay increase for nurses; ban private health care; pay increase for state school teachers; cheaper, cleaner more reliable public transport; nationalise industries to help manage environment better; extradition of prisoners to outer Scotland to work in the labour front.
Pupils did a fantastic job of thinking about and presenting their manifestos to their peers! We will leave you to decide whether their manifestos fill you with hope for the future or make you recoil in fear! We will add the winner of the election to this news piece after it is announced on Friday morning.
https://heritageschool.org.uk/wp-content/uploads/IMG-8835-scaled.jpg 1920 2560 admin https://heritageschool.org.uk/wp-content/uploads/heritage-school-logo1-1.png admin2019-12-12 09:23:262019-12-12 09:23:26Mock Election
Troy: Myth and Reality